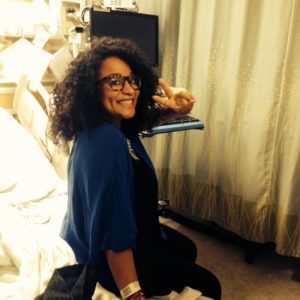 It’s been six months since Kristel Rodriguez donated her bone marrow to a patient suffering from Acute Myelogenous Leukemia, but she still thinks about her every single day.  Kristel and her marrow mate have likely never met. She owes this patient nothing, but she has given her everything: a chance at a healthy, fulfilled life.

Kristel’s donation left her “a little sore physically, but restored emotionally.”  As a Recruitment Specialist for The Icla da Silva Foundation she’s no stranger to the emotional aspects of bone marrow donation.  Kristel was inspired by the loss of her high school friend Caroline to leukemia, and has devoted the past eight years to the Foundation’s mission, working to find donors and match them to patients in need of this precious gift.  Despite her loss, Kristel is filled with “a burning desire to help those in need. Caroline is the reason my Marrow Mate is alive, because had it not been for Caroline losing her battle, I would not have known about this life-saving registry.”

Two months ago Kristel got news that her marrow match was doing well. Sadly, not every story has the same happy ending. Being a Bone Marrow Recruitment Specialist means seeing triumphs as well as difficult times.  “I have patients in heaven that still inspire me. Like Nayelis, who I met when she was nine months old, and who I worked with for three years before I had to attend her funeral. How could I not keep going?” Despite it all, Kristel has kept her hope and passion alive, and one young woman somewhere across the United States is alive today as a result.

Kristel’s passion is the embodiment of the mission of The Icla da Silva Foundation, which is the largest recruitment center in the US for the Be The Match registry.  Every year we recruit over 43,000 new potential donors. Because racial and ethnic heritage are important factors in finding a genetic match, those with racially diverse backgrounds often struggle to find a donor.  The Foundation works to reach populations that are under-represented in the registry so that everyone has the opportunity to find a compatible match.

When asked how she felt about giving her bone marrow, Kristel said, “I would do it again in a heartbeat. To know that she’s feeling the warmth of the sun, seeing the beauty of nature around her, and laughing with her loved ones because of me makes me feel like the luckiest person in the world.”

If Kristel’s story inspires you to Be The Match, you can contact her at Kristel@icla.org.