On a cozy street in Queens, the sun is shining through the clouds. It’s a typical day in suburban New York City, as cars pass slowly down the road and neighbors walk their dogs down tight, hilly sidewalks.

At the end of the street, at the corner of 145 Place, stands a signpost. Two city workers diligently strap a second sign to the post. The sign reads “Robert C. Lohnes Way.” A young, red-headed woman watches them, smiling. Her husband stands beside her, holding her hand.

The Robert C. Lohnes Way sign has hung at 145 Place since 2015, but it was whisked away during a volatile wind storm that hit the sleepy neighborhood last March. The sign was instilled to honor the life of Robert “Bob” Lohnes after he passed away from MDS in 2014. It is an acknowledgement, not only of Bob’s battle with cancer, but of the long and adventurous life he lived. 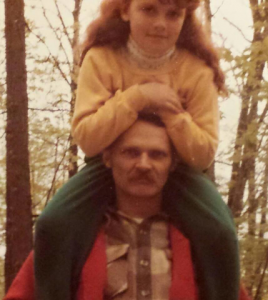 An unmistakably tall and spritely figure, Bob’s bright eyes shone above his signature shapely moustache. Bob’s life was one of service. He left behind a legacy few could hope to achieve. As a younger man he served in the Navy during the Cuban Missile Crisis and then became a New York City Police detective. He was a fingerprint expert called upon by the FBI to support several high-profile forensic cases. He volunteered for the Whitestone Community Volunteer Ambulance Service and was a post 9/11 Rescue Recovery and Identification volunteer. For 30 years he was a Scoutmaster, affectionately called “Uncle Bob” by his Scouts. During his tenure he lead over 50 Scouts to the highest rank, known as the Eagle Scout.

It was just before a Scout trip, during a required routine physical, that he learned there was a problem with his blood count. When he returned from the trip, he underwent further tests. Finally, he learned he had Myelodysplastic Syndrome (MDS). MDS is a blood cancer which disrupts the production of blood cells.

Doctors told Bob and his family that he would need regular blood transfusions, and that to cure the cancer he would need a bone marrow transplant. Bob, characteristically, wasn’t fazed, but his daughter, Melissa, wanted to know more. She began to research the disease, their options and organizations who supported patients in Bob’s position. It was then that she learned about The Icla da Silva Foundation. A service-oriented family, Bob and his wife Magaly, along with Melissa and her husband Mike, formed a team, “Bob’s Mustaches” at the Foundation’s annual Matchmaker 5k Run/Walk, held on Roosevelt Island in New York.

Things progressed faster than expected. Bob’s brother was tested to see if he was a bone marrow match. Like 70% of all patients who need a bone marrow transplant, he wasn’t able to find a compatible match within his family. In February 2014, he began experimental treatment, but his condition only worsened and he was soon hospitalized. The doctors told him and his family that his kidneys were failing from an infection, as his immune system weakened. Just five days after being hospitalized in March 2014, he passed away. 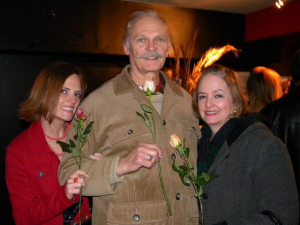 In the face of terrible grief, those who loved Bob wanted to create a remembrance for him. One of his Eagle Scouts, Brian Connolly, petitioned the local town council to have 145 Place co-named “Robert C. Lohnes Way.” Bob had lived on the street for nearly 50 years and raised both his children there. Brian was able to collect signatures from the required 80% of the street’s residents, and at an official naming ceremony, the honorary sign was hung for the first time.

But the street isn’t just named after Bob, it is imbued with his memory. His daughter Melissa recalls, “We would wait for him to get home every day. We would see him walking down the block and we would run down the street and jump into his arms.”

For Melissa, community service is a way to remember her father’s life and honor his passion for helping others. The Lohnes family has run in every Matchmaker 5k Run/Walk since Bob’s passing, and Melissa has consistently come in 1st place as Individual Fundraiser. Bob’s Mustaches has been the Top Fundraising Team for four years in a row. 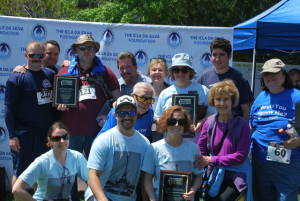 The family hosts an annual art benefit, gathering donations from the art world and their own community. The event includes a silent auction and raffle, as well as games and door prizes. Some years they host a bar event with a local establishment that donates half the proceeds from the night to the Matchmaker 5k team.

This year, in recognition of their outstanding volunteer activities (for The Icla da Silva Foundation and many other community service works alike), The Disney Company honored Melissa, Mike, and Magaly with the VoluntEAR of the Year award. 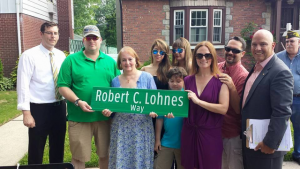 For Melissa, no award can compete with the knowledge that her father’s memory continues to bring health and happiness to others. The Robert C. Lohnes Way sign at the end of 145 Place is a symbol of their dedication to his legacy. The sign is also a symbol of the love they shared, and the many sunny afternoons Melissa spent, eager to jump into her father’s waiting arms.

Even though they are born and bred New Yorkers, please join us and the Lohnes family on September 24th in the beautiful city of Boston for the Matchmaker 5k to support patients in need of a life-saving transplant. Register Now:

The Icla da Silva Foundation hits the jackpot when it comes to selfless volunteers who unite behind the quest we are all passionate about: a second chance at life through a perfect bone marrow donor match.  It is not every day, however, one comes across a soul which affects the world as powerfully as this one does.  Movers and shakers, volunteers like Omari Jinaki, are the backbone of our organization, without whom the unending workload would quickly overwhelm.

There is something pure and special about Omari.  His career in advertising perfectly suits the vibrant personality and charming sincerity he radiates when you first meet him.  In 2009, Omari was offered a golden opportunity to internship at Ogilvy & Mather in New York.  An incredible upside to the internship was the chance to fall under the mentorship of executive Marlon Layne, described by Omari as “vibrant, effusive, emotive, purposeful, driven, diligent, far-reaching, and culturally bold. It was inspiring to be around him and to emulate him.”

Not long afterwards, Omari had moved on to bigger and better things, fueled by the success he drew from Marlon’s robust leadership and continuous encouragement.  His beloved and awe-inspiring mentor was then unexpectedly diagnosed with a blood cancer only curable through a successful bone marrow transplant.  Shocked and uninformed about the implications, Omari began a search for information, determined to come to a full understanding of what his friend and mentor might be facing.

In the ensuing weeks and months it became clear something urgent needed to be done.  Enquiries led Omari to the realization that Marlon, and others like him, needed dedicated assistance, a lot of prayer and a small dose of luck if a perfect donor match was going to be found on time. Left waiting for something so important seemed inhuman and cruel.  Could finding a perfect match be so difficult?

It turns out that for minorities, with a limited pool of donors, and society’s preconceived misconceptions about what it takes to be a bone marrow donor, it can be.  Not to be deterred, optimist Omari stepped forward and chose action over complacency.  He connected with the Icla da Silva Foundation, the largest recruitment center for the Be the Match bone marrow registry in the United States.  From that moment forward, he remained dedicated to raising funds, creating public awareness and recruiting potential bone marrow donors.

The Icla da Silva Foundation deeply appreciates Omari’s selfless involvement and hard work, aligned with the cause so close to our heart.  Sadly, Marlon was unable to find a match on time and succumbed to the disease soon afterwards.  Omari and his colleagues embarked on a bold campaign in loving memory of the great man they all admired.  The aim of the movement was to spread the word about the prevalence of blood cancers, the need for a greater donor pool and the plight of those with an unknown amount of time left to live a full and wonderful life.

Amazingly, the first three years the group was able to raise almost $42,000 and sign up 160 new bone marrow donors to the Be the Match Registry.  On 1 July 2014, Omari and his colleagues were part of an awareness-raising showcase on Spectrum News NY1.  The inspiring piece highlighted the need for both stateside and international bone marrow donors, clarifying common misconceptions about the bone marrow testing and donation processes.  A reassuring demonstration on how simple it was to test as a match drew large public attention.  It cleared the path for thousands of potential new donors for bone marrow registries like Be The Match Registry.

In the time working with the Icla da Silva Foundation, Omari has seen how bone marrow transplants work.  He has met patients saved through a successful match.  He spends time with these families and sees the results with his own eyes. ”It is incredible to see someone come back to life; and regain their zest, energy, and spirit.”

Omari pours his time and energy into fundraising efforts such as the Matchmaker 5K Run/Walk benefitting the Icla da Silva Foundation.  Omari has been running this particular race since 2011 and continues to return year after year, even after he having relocated away from New York.  He was drawn to this cause because a cure exists.  It only requires understanding that the larger the registry of potential donors, the greater the chance a match will be found and a patient cured.  “I was one of those unaware healthy people.”

Omari’s contributions are truly invaluable and his attitude is inspiring. It seems fitting to end this tribute with his own words of encouragement:

“With your help, I hope we can bring more live-saving treatments to patients searching for a marrow match.   Your donation goes directly to register a more diverse array of marrow donors on the registry, which increases the chances of each patient finding the live-saving donor they need. I remain incredibly appreciative of the long-time, ongoing supporters, who support Icla because they support me.  I will never forget my first donor, Kenny Alexander, who sparked for years of life-saving treatments for people around the world.  Immense thanks.  Spread love.”

You too can change a life today by:

Even the smallest amount helps us continue our efforts to grow the registry and provides financial assistance to patients in need.

Of course, you could also become a volunteer and participate in the heroic efforts displayed by Omari and so many other valued members of this worthy cause.

We thank you Omari Jinaki.

We appreciate your continued support of the Icla da Silva Foundation and recognize your unique enthusiasm for love and life.