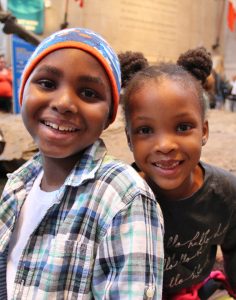 It required a coordinated effort of logistics, financial assistance, and of course emotional support to create this life-saving journey.

You may remember a young patient we worked with named Victor Garcia. At the age of 9, Victor was diagnosed with acute biphenotypic leukemia (BAL), a rare form of leukemia. He was being treated at a hospital in his home country of the Dominican Republic. His doctor determined that the only cure for Victor was a bone marrow transplant from a matching donor.

But there was no matching donor on the registry.

Since siblings represent the best chance for a match, the Icla da Silva Foundation was able to fund HLA testing for his 7-tear-old sister Neyyleyn.

We were happy to find out that Neyyleyn was a 100% match for her brother Victor. But unfortunately, the local hospital did not have the resources to perform the transplant.

The Icla da Silva Foundation went into overdrive. We supported Victors’ family and helped coordinate his transplant under a clinical trial at Yale New Haven Teaching Hospital in Connecticut. Our team worked the logistics between the family, the doctors, and the consulates from both countries, assuring that Victor would be able to receive a life-saving transplant.

Thanks to financial support from donors like you, we were also able to fund transportation for the Garcia’s to the United States, while the Ronald McDonald House graciously provided housing.

It took many steps and multiple partners, but a little boy’s life was saved. The Icla da Silva Foundation is both proud and happy to have played a critical role.

Victor is doing well, he is back home in the Dominican Republic; going to school and playing baseball.

You can help us create more life-saving stories like Victors. Please consider a financial contribution to our Icla Cares program.

You may remember Asaya Bullock from earlier stories on our website and social media pages. Asaya suffered from a rare disease called IPEX Syndrome. IPEX is a rare, life-threatening, autoimmune disorder, which caused Asaya to suffer from severe stomach issues, migraines, body aches, rashes, and joint pain for most of his young life.

His only cure was a matching bone marrow donor.

We have been working with Asaya since 2015, recruiting potential marrow donors and providing urgent needs assistance for his family. This video shows 4-year-old Asaya when we first began his search.

There Was No Matching Donor

While thousands of donors were added to the national registry in Asaya’s name, a matching donor was never found.

As Asaya got older, his illness became worse. His health was deteriorating. He was in and out of the hospital multiple times in recent months.

After his original diagnosis, the doctors didn’t believe he would survive past the age of two. He was already living on borrowed time. 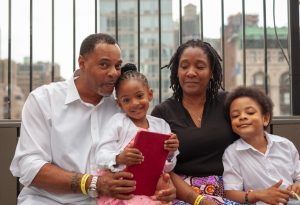 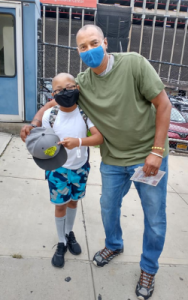 The medical team agreed to the family’s request for a ‘haplo’ transplant. A haploidentical transplant uses healthy, blood-forming cells from a half-matched donor. The donor is usually a parent – since each parent represents about half of your genetic make-up.

They are not always successful.

On July 27, 2021, Asaya received a half-matched transplant from his dad.

The transplant was successful. 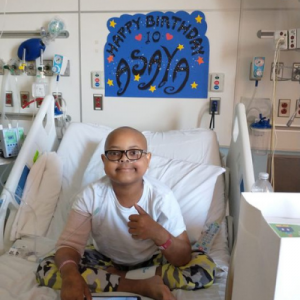 Three days after his transplant, on July 30th, Asaya celebrated his 10th birthday!

Asaya seems to be doing fine. His body successfully accepted 99.4% of the cells. His doctor says this was rare.

So far, there are no complications and he is eating and drinking on his own, which is a terrific sign.

Fortunately, there was room at the Ronald McDonald House in NYC. Asaya will have to stay for 120 days, remaining close to his hospital while they continue to check his progress.

We wish Asaya a long, healthy, pain-free life…with many, many more birthdays to celebrate!

Help us support more patients like Asaya by considering a donation